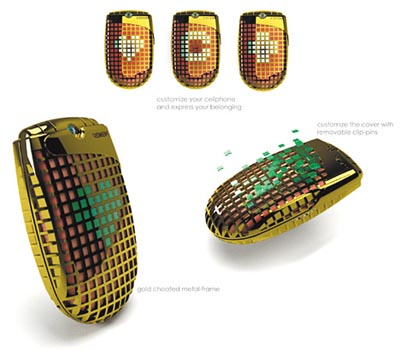 Personalization is a big thing in the cell phone industry, because many people don’t want handsets that are identical to those of their friends. Purchasing new cell phone faceplates is a good strategy for customization, but even those faceplates are mass-produced. What is a personalizer to do? Designer Nils Siegel has come up with a faceplate design with nearly infinite possibilities.

Nils envisions a clamshell phone whose faceplate is composed of several little squares. Instead of having a set design, these squares can be removed, replaced, and moved around to create whatever new mosaic tile design tickles your fancy that day. Naturally, it’s a touch of a tedious process, so you’ll need to spend some time re-arranging those tiles and it might be good to have a plan heading in.

No stranger to money-grabbing, Siegel also mentions that “limited edition versions with precious metals and gems could also be created to heighten the sense of personal style and design.” Yup, it’s Swarovski time all over again.