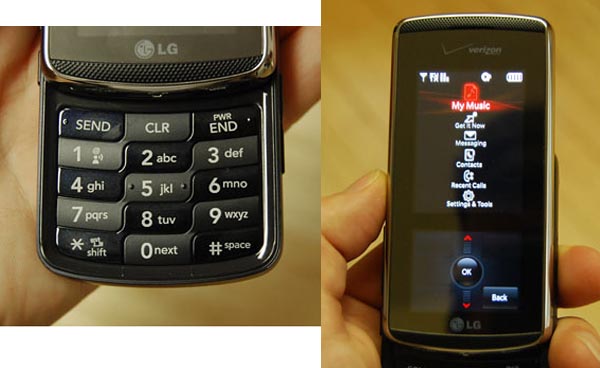 The LG Venus looks like quite the innovative phone, replacing the main navigation keys with a secondary touch-sensitive display. By doing double screens in a whole new way, the LG Venus (available through Verizon) is certainly attracting some attention. When Wilson Rothman of Gizmodo took the Venus out for a test drive, he immediately came to the conclusion that this slick slider phone is “better than Chocolate.”

In many ways, the LG Voyager is an update to the LG enV, and the LG Venus is the upgrade to the LG Chocolate. The LG Chocolate had touch-sensitive controls below the main display, but the Venus has a second “screen” that changes depending on the situation. Menu navigation is done through a vertical slider whereas music controls emerge when you want to jam to some tunes. The “sleek sexy look” will turn some heads too.

The LG Venus is so well implemented that Wilson says that “now and again, the Venus makes real Nintendo DS use of its double screen.” Other observations include a “tolerable” speaker and a “primitive” music player, leading to the conclusion that it’s better than Chocolate, but it’s still not that good.