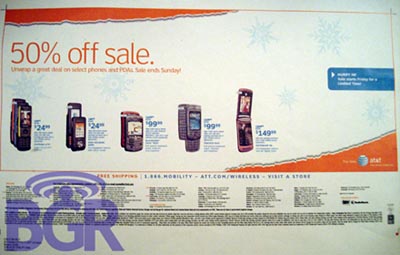 As if there weren’t enough deals floating around for Black Friday already, AT&T will apparently sell five of its most popular cell phones for a whopping 50% off. That’s right, you can get a BlackBerry Curve 8310 for half-off and from what we can gather, there really are no strings attached. Well, no more strings than the number that are normally attached to a new AT&T contract.

After you’re finished stuffing yourself with turkey and pumpkin pie, you can waddle your bloated self over to an AT&T kiosk and grab a Samsung A737, Sony Ericsson W580i, BlackBerry Curve 8310, Pantech Duo, or Motorola RAZR2 for the half the price they normally go for.