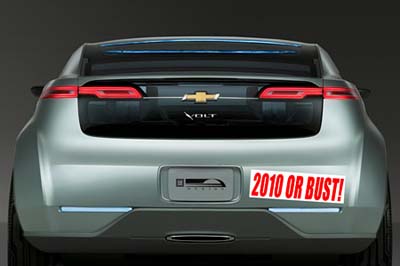 You will be able to say goodbye to the fuel pump in a little over three years, because Bob Lutz has gone on the record to say that the Chevrolet Volt will be heading in production “by the end of 2010.” While this could mean that the plug-in hybrid will be ready before that, even the 2010 production date is pushing GM’s limits just a little.

You see, employees and engineers who have been working on the Chevy Volt are “becoming increasingly nervous” about meaning this deadline. At the same time, Lutz and other GM head honchos are “insisting it be done.” There just may be a bit of disjoint between management and the underlings in this respect.

Working prototypes of the Chevy Volt are expected by Easter 2008. After that, it’s simply a matter of ironing out the kinks and putting the final marketing pieces in place. Will the Volt be able to topple Toyota’s dominance in the hybrid market? Considering that the Volt doesn’t need gas for short trips, it just might. And it’ll look hot doing it.