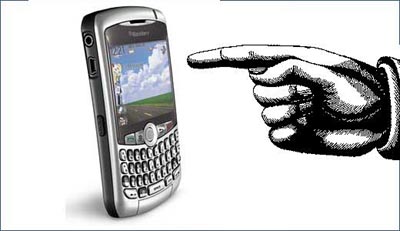 Although there are plenty of other devices that already have touchscreens — HTC smartphones, Apple iPhone, etc. — we have yet to be treated to a touchscreen’d rendition of a BlackBerry device. That may soon change. There’s word going around that Research in Motion is working on the BlackBerry 9000 series and this next-generation handheld will boast a new touchscreen-based operating system.

And we’re not just talking about swapping out the existing display for a touchscreen either. Sources are reporting that the BlackBerry 9000 series will rock a full face touchscreen, meaning that the company is ditching a physical keyboard in favor of an on-screen one, not unlike that found on the HTC Touch or Apple iPhone. Other critical specs include GPS tracking, WiFi, push email, and “improved multimedia capabilities.”

The current timeline calls for a launch some time in early 2008. The BB 8000 series will be kept alive for people who prefer physical QWERTYness.