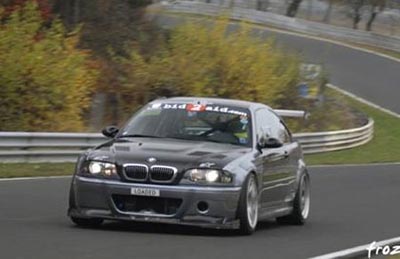 The Nurburgring in Germany is a proving ground for all sorts of supercars and the ‘ring now has a king. Beating the Pagani Zonda F by a full five seconds, a lightly modified BMW M3 CSL managed to complete a lap in a mere 7 minutes and 22.8 seconds.

Typically, the fastest cars on this track have been the ones that weigh the least and have the most horsepower. Ironically (or surprisingly), the BMW M3 CSL actually weighs 400 pounds more than the Pagani Zonda F. What’s more it has 70 fewer horsepower too, so the time must have been made in the corners rather than in the straights. The supercharged BMW M3 CSL puts out 532.7 rwhp and weighs 3,139 pounds with 30L of fuel.

And you just might be able to buy this Nurburgring king for a couple of pennies. The BMW M3 CSL that you can watch in the video below is actually for sale and it’s an auction where the winner is the person with the lowest unique bid. Check it out at bid2aid.com.