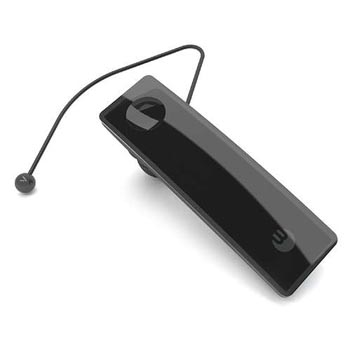 Do you not like buttons? Do you have an utter disdain for flashy lights? If so, you may want to consider the “Sense” Bluetooth headset from the guys at Bluetrek. Instead of all sorts of buttons protruding in every which direction, the Sense headset features a sunken dimple. This sunken area represents the only touch sensitive “button” for all of your primary controls.

The Bluetrek Sense Bluetooth headset measures five centimeters long and weighs a paltry 8 grams, making it among the lightest wireless headsets available today. The black mirror-like finish is very attractive as well. The dual-colored LED display lets you know when battery levels are low. This information is also relayed through the built-in “Voice Alert” that says the function or selection you’ve accessed.

The wire-thin ear hook can be removed if you wish to use the Sense as an in-ear headset. Talk time and standby time have been rated at up to 4 hours and 5 days, respectively. The Bluetrek SENSE — with Bluetooth 1.2 technology — will ship in early 2008 with an estimated street price of $100.