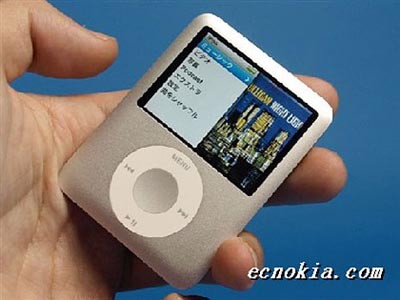 We normally turn to China for knockoff products, and although the text looks Korean or Japanese to me, the actual product shown is indeed made in China. The third-generation iPod nano has received a very warm reception from the public for its cool CoverFlow navigation, pipsqueak proportions, and glorious color screen. But this knockoff seems to be even better.

Created by ECNokia (spreading the piracy love to cell phone manufacturers too, I guess), this iPod nano-like music player takes on the exact same form factor as the third-gen nano, except it boasts a few extra features. Additional goodies include an FM tuner, microphone, a bigger display (that happens to be a touchscreen), and even a 1.3 megapixel camera. The menu navigation still has that cool split-screen thing, don’t worry.

There are sacrifices that need to be made, of course. Instead of the extra speedy internal flash memory, you’re left with a standard SD expansion slot for storage. No word on pricing or availability — sounds like wholesalers only for now — but you can probably find out more here.