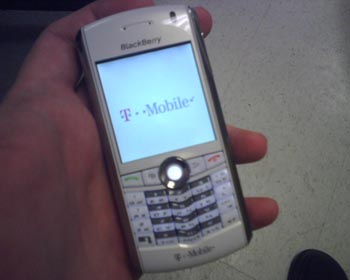 The rest of the features remain largely unchanged, including the trackball navigator, SureType keyboard, integrated GPS, stereo Bluetooth, microSD memory expansion, updated mail software, and the 3.5mm headset jack. Because the Pearl 8120 boasts WiFi, it opens up the possibility of VoIP and VoIP-like services. More specifically, the user manual — which can found at the FCC — makes mention of a UMA client, meaning that it can hot swap (so to speak) between cellular and Internet-fueled phone calls.

Could this mean that the WiFi-equipped BlackBerry Pearl 8120 is destined for T-Mobile and their [email protected] service? Time will tell.