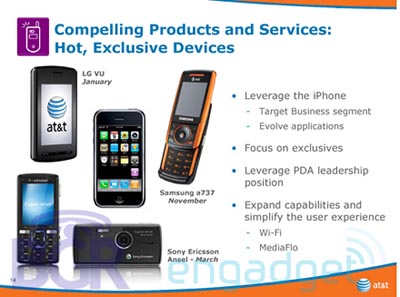 AT&T wants to prove NASA wrong. The general public probably views the Apple iPhone as more of an entertainment-minded handset than one that is appropriate for business purposes, but AT&T is aiming to market a more business-oriented model that’ll make its way into boardrooms across the country.

This internal AT&T slide encourages sales people to “leverage the iPhone” and to target the business segment. Whether this means a slightly different marketing campaign for the existing iPhone or the creation of a slightly modified handheld remains to be seen. They do talk about evolving applications for business purposes, like a way to integrate the iPhone with a corporation’s Exchange server.

On this same roadmap, we see at least three other cell phones that are just over the horizon. The Samsung A737 slider looks to be launching this month, followed by the iPhone-like LG Vu in January and the Sony Ericsson K850i “Ansel” in March. They want to emphasize exclusives, so I’d imagine that all three phones are destined for the spinning blue globe only.