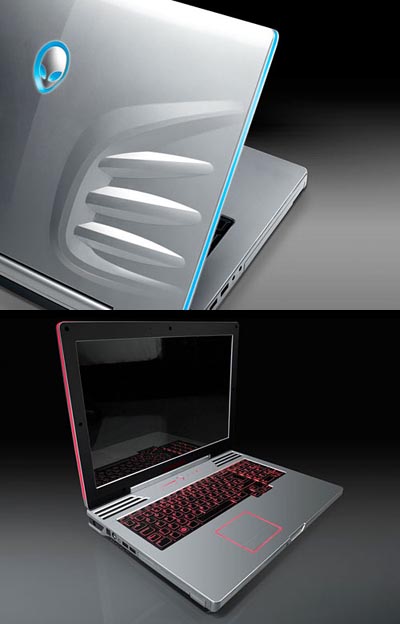 We caught a sneak peek at the Alienware Area-51 m15x and m17x laptops on Friday and now the notebook maker has unveiled a few more details, along with some more telling pictures of what these hot gaming laptops are going to look like.

The Alienware Area-51 m15x and m17x gaming notebook computers will get equipped with NVIDIA GeForce 8800M GTX graphics for “3D performance closer to desktops.” The 15.4-inch m15x gets just one of these graphics cards, but the 17-inch m17x doubles them up for some crazy SLI action. The Intel Core 2 Extreme processors (2.8GHz) will keep things speeding along just fine.

The Alienware m15x will have dual hard drive bays, whereas the m17x takes it one step further with triple hard drive bays. Both will have the ability to use the extra space for either extra storage or RAID. You’ll also be given the option to have the Alienware ribbed outer lid (Skullcap) or smooth surface by Ripley.

Final pricing and configurations will be announced early next year when the flagships officially launch.