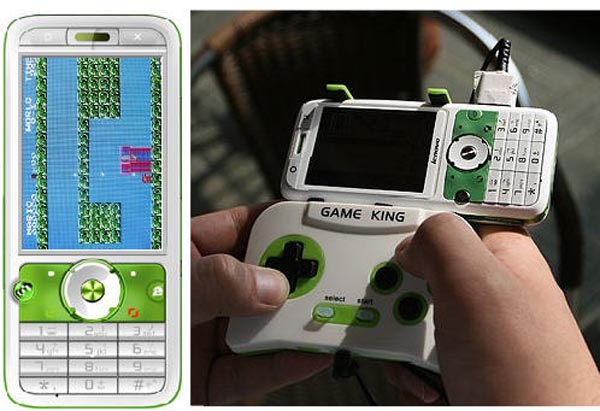 We typically get caught up in all of the hottest new technologies, pushing the megapixel count higher and shoving as much internal memory as we can into the smallest of packages. We’ve seen a huge progression in the video game industry, developing games that look more realistic and intense than ever before. Speaking for myself, however, I never had more fun with an old gray box filled with a pudgy Italian plumber. Lenovo agrees.

The newly announced Lenovo i909 gaming phone is squarely targeted at the more nostalgic among us, because when outfitted with a Game King controller peripheral, the i909 effectively becomes a portable NES. The candybar phone has been loaded with an NES emulator and the Game King controller gives you more than enough buttons to handle some classic Mario, Zelda, or Mike Tyson’s Punch-Out action. You know you love Little Mac.

Outside of gaming, the low to mid-end handset comes with a 2.4-inch QVGA display, 2 megapixel camera, microSD expansion, and MP3/video player. The Lenovo i909 NES gaming phone is currently only available in China. Importers, I’m looking at you.