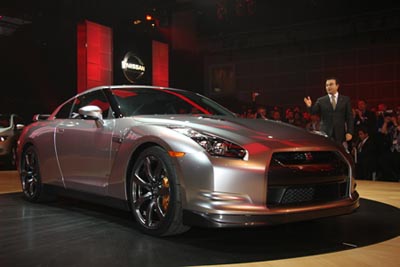 A little over 2,000 cars doesn’t sound like a huge pre-order number, but when you consider that Nissan had a 2008 sales target of 2,400 units for the Nissan GT-R, it’s starting to sound a heck of a lot of more impressive. The US-spec Nissan GT-R was only unveiled a couple of days ago and they’re already inches away from their sales target for all of next year. If that’s not a resounding success, I don’t know what is.

That said, they’ve been taking pre-orders for the JDM-spec vehicle for about two months, so it’s not like the new GT-R is an overnight success. The AWD supercar goes on sale in the land of the rising sun in less than three weeks with the first shipments heading into driveways on December 6th. As you recall, the US-spec coupe is powered by twin-turbo 3.8L V6, putting 480 horses at your disposal.

It will be interesting to see how Nissan will be able to keep up with the demand. As it sits now, only about 1500 vehicles are destined for the United States. Maybe it’s time to ramp up that production!