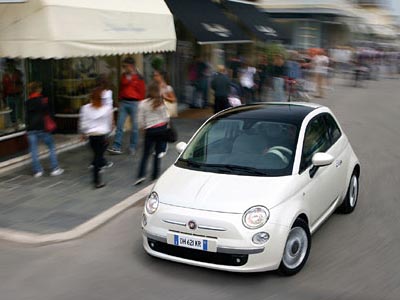 There are some great cars available in Europe that you will never find on our side of the Atlantic. Some of those Italian and German supercars are out of this world, never approaching street legal status in the United States. After much deliberation, the 2008 European Car of the Year was decided and it’s not a car with a huge engine or monstrous horsepower numbers. Nope. The winner for 2008 is the Fiat 500.

The pint-sized hatchback was awarded the car of the year by EVO not that long ago, but what makes this most recent award a touch more special is that the European Car of the Year “is named by a collection of major European publications in several different languages from several European countries.” And they came to the consensus that the Fiat 500 was the best of the best. Other contenders for the title included the Nissan Qashquai, Peugeot 308, Ford Mondeo, Kida cee’d, and Mercedes C-Class.

The runner-up for the award was actually very close. Whereas the Fiat 500 scored 385 points, the Mazda2 squeaked in with 325 points. That’s mighty close! The Fiat 500 follows a long tradition of winners, though, seeing how the carmaker has won the award nine times.