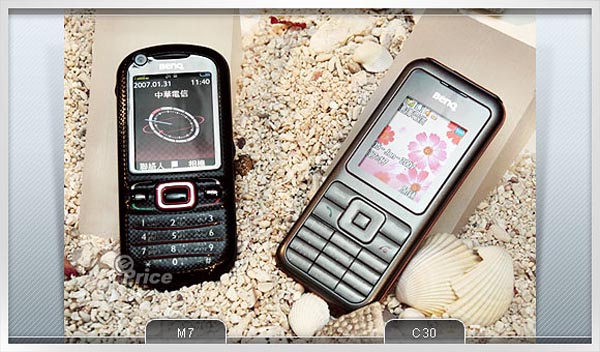 Although most people think of guys like Nokia and Sony Ericsson when it comes to the hottest new cell phones, BenQ is still very much an impact player and they’re hoping to make a bit of an impact with the BenQ M7. Shown here on the left, the BenQ M7 is supposed to be a stylish and versatile phone, but at the same time, they’ve built it tough so that it is “capable of resisting any forces.”

The protective case wrapping around the handset also helps to protect it against water, sand, and other natural elements that could damage the precious electronics found within. Critical features that you’ll find under the hood include 3G connectivity, integrated GPS support, a 2 megapixel camera, a secondary VGA camera for video calls, and a media player for mobile entertainment.

I don’t know about you, but if you ignore the feature set, doesn’t the BenQ M7 look like a cheap Siemens phone?