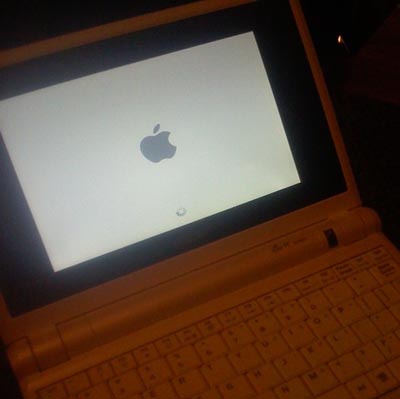 As if the comparisons between the glossy white Asus Eee PC and a MacBook weren’t obvious enough already, you can now hack the former to run the latter’s operating system. Some guy named Dan has managed to install Mac OS X on the Asus Eee PC, opening up the doors for all sorts of Apple-flavored love.

Naturally, this hack falls into a legally gray area, so you’ll want to proceed with extreme caution. You also have to bear in mind that the build of Mac OS X floating around on BitTorrent isn’t exactly legal either, although the PC-patched copy makes for a “moderately easy install.” Based on the specs on the Asus Eee PC, you’ll probably want to stick with Tiger rather than Leopard.

With all this hacking and modding, you’ve got to wonder why Apple hasn’t created a more compact version of the MacBook to compete against this beautiful UMPC. Call it the MacBook Nano and it’d sell like hotcakes.