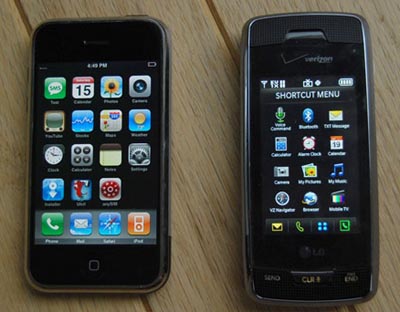 It’s obvious enough that the LG Voyager is Verizon’s answer to the iPhone. The similarities are unmistakable. Both have large touchscreens on the front, both have an intense multimedia and messaging slant, and the shortcut menu on the Verizon Voyager looks a little too much like the home screen on the iPhone.

What you see here is the upcoming LG Voyager from Verizon placed side by side with the Apple iPhone from AT&T. It’s almost like their brothers, really, because the family resemblance is definitely there. Based on these pictures, we can come to some conclusions regarding their relative proportions. The Voyager is longer than the iPhone, but it isn’t quite as wide. Because it is a clamshell, the Voyager is also thicker than the iPhone, but that’s the price you pay for a physical QWERTY keyboard and a second display.

I do find it interesting, however, that there are the four quick-access soft keys on the main home screen of the Voyager, just like the iPhone. Looking at the success of the LG enV paired with iPhone-like good looks, the LG Voyager could be a huge hit for Verizon.