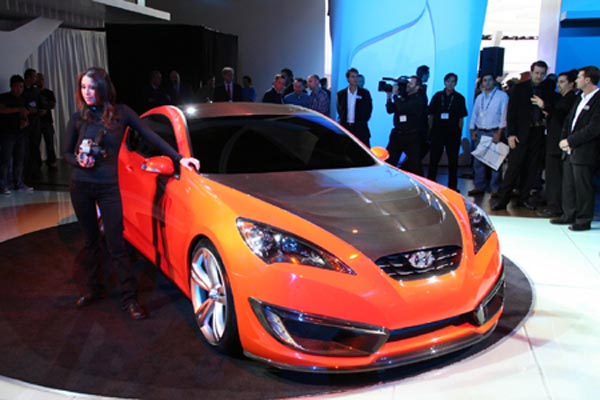 There has been a lot of news and rumors surrounding this supposed RWD Tiburon replacement from Hyundai, but after some badgering, several details have been leaked about the Hyundai Genesis Coupe, including the fact that it will NOT replace the Tiburon. The Tibby, for the time being, appears to be safe, taking care of the lower-end FWD coupe market whereas the RWD Genesis Coupe will boast considerably more power, tackling the Ford Mustangs of the world.

The spy shots that you have been seeing are fairly accurate as to what the production model will look like. It’s quite the stylish sports car and it’ll certainly turn a few heads with the right paint job. A bland silver mind not do the trick, but a blazing orange-and-black scheme will drop some jaws.

The production version of the Genesis Coupe, whatever it may be called by the time that rolls around, is set to go on sale in late 2008, probably as a 2009 model. The V6 version will likely sell in the mid $20k range, whereas Hyundai is hoping to keep the four-cylinder under $20k.