We’ve been waiting for this day for months, maybe years. The next-generation R35 Nissan GT-R follows in a long line of hugely popular Japanese supercars. The GT-R is what happens you when you take a Nissan Skyline and put it on steroids. We spotted the production model last month and now we’re treated to the real deal.

The 2008 Nissan GT-R was unveiled at the LA Auto Show earlier today and this isn’t the JDM version you’re looking at. This is the US-spec Nissan GT-R and it looks to be one of the best supercar bargains you’re going to find on our side of the Pacific. The MSRP was announced at $69,850 (and up), possibly de-throning the Corvette Z06 as the best valued coupe on the road.

The twin-turbo 3.8L V6 engine thrust this car around the Nurburgring in a mere 7:38, thanks to the 480 horsepower and 430 ft-lbs of torque. Naturally, the 2008 Nissan GT-R is all-wheel-drive with a RWD bias (torque automatically adjusts between a 100:0 and 50:50 split). Highlights include a six-speed sequential gearbox, 15-inch Brembo rotors, 20-inch rubbers, and a 0.27 coefficient of drag.

Pre-orders for the Nissan GT-R will commence in January with shipments starting some time in June 2008. 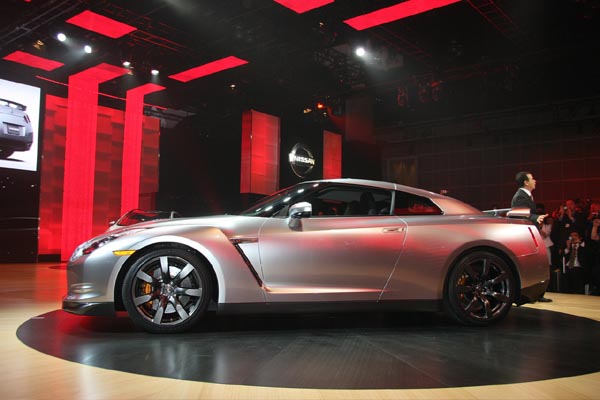