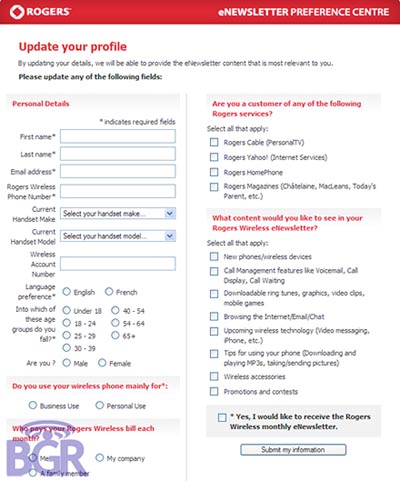 They’ve really got to stop teasing us like this. We see hints at a Canadian iPhone launch over and over again, only to have Rogers Wireless shatter our dreams with a non-committal non-confirmation of the rumors. And they’re doing it again.

Navigating over to the Rogers eNewsletter preference page on their website, we’re offered an option to keep updated about upcoming wireless technology. That sounds innocent enough until they mention the iPhone by name. Yes, it’s a single word on a fairly lengthy page of preferences, but it does point toward a possible Canadian launch of the Apple iPhone through Rogers Wireless. After all, it’s mentioned as part of the “upcoming wireless technology”, alongside “video messaging” and “etc.”

What do you think? Is this pseudo confirmation of a Canuck-ified iPhone? Or is it just Rogers trying to gauge our interest in an Apple phone?