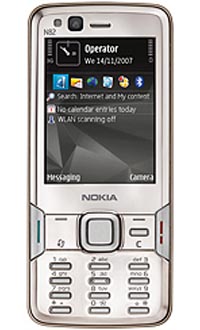 After much rumor-mongering and spy shots, the Nokia N82 has officially been announced by the Finnish phonemaker, confirming many of the specs and features that we’ve been hearing about these past couple of weeks.

As you can quite plainly see, the form factor is right in line with the Nokia N82 prototype that we saw last week. In fact, it looks like very little has changed since we saw the first live spy pics last month.

Arriving right on schedule, the Nokia N82 has a spec sheet that sounds surprisingly similar to the N95 slider. You get quad-band GSM/EDGE, WCDMA 2100, 802.11b/g WiFi, stereo Bluetooth, integrated GPS, and an FM radio. That’s a lot of wireless connectivity! Rounding out the features are a front-mounted camera for video calls, a 5-megapixel camera on the back for stills, 100MB internal memory, 2GB microSD card (included), and S60 3rd Edition.

Look for it in “limited markets” for 450 Euros.