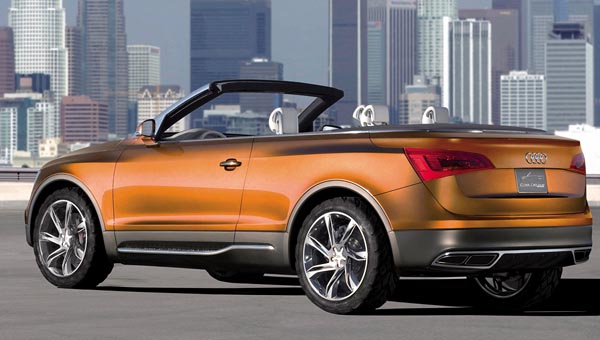 Automakers are certainly starting to carve out some interesting niches in the market. We’ve seen guys try to compete by formulating new hybrid technologies. We’ve seen the strong emergence of the compact crossover, slotting right in between a sports wagon and truck-based SUV. But this. This is something quite strange.

The BMW X6 created what appears to be the SUV-coupe segment and now the newly revealed Audi Cross Cabriolet Quattro concept has opened the doors to a world filled with SUV convertibles. It’s got the ride height (and chassis) of an SUV, but with a full retractable roof and only two doors, it looks almost like a Volkswagen Eos.

Unveiled at the LA Auto Show this week, the Audi Cross Cabriolet Quattro concept introduces “a new vehicle segment” and “combines the genes of a typical dynamic soft-top convertible from Audi with the all-round qualities of a fully fledged SUV.” Under the hood is a 3.0L TDI engine good for 240hp.