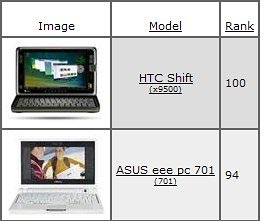 UMPC Portal has taken a closer look at the two devices, noting the differences that may account for the 900 Euro difference. After all, the Asus Eee PC rings in at $399 (about 273 Euro), compared to the HTC Shift, which can cost as much as $1500. In terms of differences, they say that the operating system is an obvious difference. The HTC Shift is a business-level device with Microsoft software, whereas the Asus Eee PC makes use of the open Linux platform.

Costly advantages on the HTC Shift include post-sale support, a touchscreen display, added mobility and security features, considerable more internal storage, HSDPA, and the fact that many consider the HTC Shift to be “so small” and “so stylish” compared to the “cute” Asus Eee PC. A stat-for-stat comparison can be found here. It’s up to you whether you think the price difference is warranted.