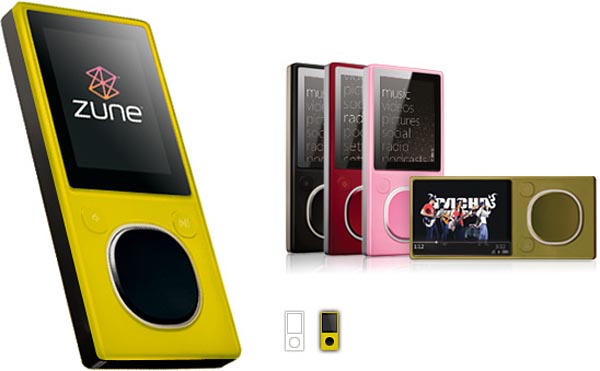 Today is the big day that the Zune 2 officially launches in stores, granting Microsoft a second shot at the mobile music and video market. For the 4GB and 8GB versions of the new Zune, Microsoft opted for flash memory, placing it as a direct competitor against the iPod nano. We also knew that the new Flash Zune would be offered in four colors: black, red, pink, and swampwater green, but did you know there was a secret fifth color?

Apparently so, because a secret color known as “Citron” has mysteriously emerged out of the woodwork and it is certainly a lot more bold than the other Flash Zune players. The “Citron” Zune looks to be a very vibrant yellow, almost neon-like. In this way, you may compare it to something like the Lamborghini line of laptops from Asus. Another vital difference is that the Zune Pad on the Citron Zune is all black, unlike the other schemes that have color-matched pads.

We can assume one of two things: either Microsoft is working on some sort of special edition Zune and it’s going to take on the Citron color scheme, or this is just a fifth color that will be added to the collection somewhere down the line, maybe in time for the holidays.