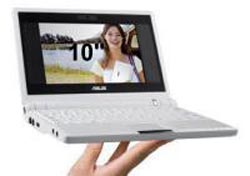 The Asus Eee PC has been fairly well received by the media and for good reason. The build quality is great, the operating system is easy to use, and the tiny laptop chugs along at a most expedient pace. However, it’s not like the Asus Eee PC is without shortcomings. Well, Asus is reportedly addressing some of these issues with an updated Asus Eee PC, a unit that will be bigger in more ways than one.

For starters, the overall size of the new laptop will be substantially increased, stretching the screen from its current seven inches, up to an almost “normal” size of 10 inches. That still makes it smaller than most conventional notebooks, but it’s not quite as compact as its portable DVD player-sized compatriot. Also, they’ll be bumping the 4GB of flash memory up to 8GB. The RAM is getting doubled as well, shooting from 512MB to one full gig.

Some of these internal upgrades may also be made available on the seven-inch Asus Eee PC. We know for certain that the 8GB internal memory will get shoved into the 7-inch shell at some point.