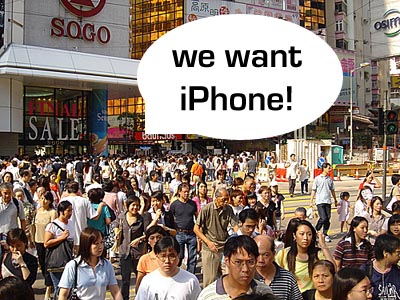 China is already bombarded with all sorts of iPhone clones, but China Mobile is in talks with Apple to bring the real deal into one of the world’s fastest growing markets. In fact, China Mobile has the largest cellular subscriber base in the world with nearly 350 million users under their belt (as of the end of September).

As with the other deals that Apple has forged around the world, the sticking point is that Cupertino wants a cut of the service revenue that will result from the sale of the iPhone. I is rumored, for example, that AT&T pays Apple $18 a month for every iPhone on the network. Similar deals were likely made in the UK, France, and Germany.

China Mobile wants to flex their subscriber base muscle, however, so Apple may have to budge just a little if they want to put the iPhone into the hands of so many Chinese users. They don’t want to share that revenue. “We still think we can maintain the operator-centric model because we have the customers, the end users,” said China Mobile CEO Wang Jianzhou. Another hiccup to consider is that China Mobile is a member of Google’s Open Handset Alliance, the group backing the Android mobile phone platform.