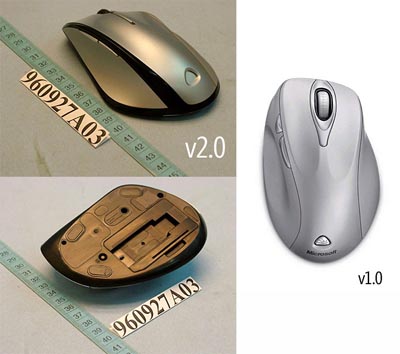 I’m using the first generation version of the Microsoft Wireless Laser Mouse 6000 right now and I’m reasonably pleased with the ergonomics of its design, as well as the functionality of the extra buttons on the side. Naturally, Billy Gates and the rest of the Redmond, Washington-based team are never quite satisfied with the status quo, so they’ve already produced the successor to the first mouse.

The color scheme is a little different, for starters. You’ll also note the addition of another button below the now-black scroll wheel. Presumably, this offers a similar functionality to the extra button found on the Logitech MX Revolution. The two side buttons have also been redesigned to look slimmer, again like the MX Rev. There are also some changes to the underside: the laser tracker has been moved slightly and there appear to be more “panels” than before.

Looks like a decent update, but not really worth the upgrade if you’re already rocking the first Wireless Laser Mouse 6000.