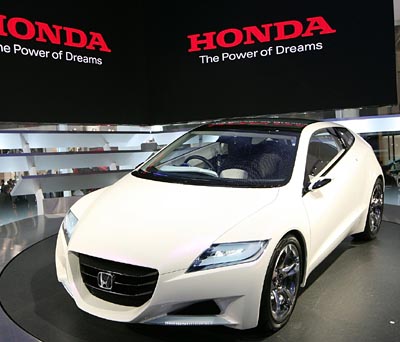 There’s no denying that the Toyota Prius is the reigning champion of hybrid world. Honda must be a little jealous of their Japanese cousin, because they’re ramping up a new car that they hope will be the Prius killer. They’ve got “big plans” for a next-generation hybrid and they hope that it will be much more successful than the Civic Hybrid.

Probably the first major step that they will take is making a car that is distinctly hybrid, because the Civic Hybrid looks cosmetically the same as the garden variety Civic. They had the Honda Insight once, but that didn’t really pan out. And they’re going to be really aggressive marketing this new product. The “expected” worldwide sales for the new hybrid will be in the 200,000 neighborhood with half going to North America.

There are two hybrid models being bandied about, one based on the FCX and the other based on the CR-Z concept. I prefer the latter myself.