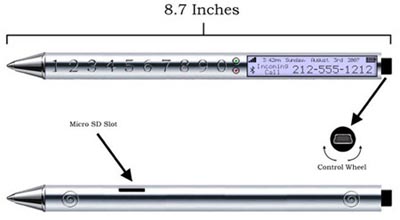 The name pretty much says it all, doesn’t it. What you see here is a device that is appropriately dubbed the PenPhone. I’m pretty sure you can figure out where the convergence side of things fits into this remarkably compact device. Unlike other multi-function spy pens, however, the PenPhone doesn’t do all that great a job at hiding its secondary function.

Sure, you can still scribble notes like how you would with your BIC or Parker pen, but the PenPhone can also be used as a phone. The digits are lined up along the barrel, but I have a feeling that they’re not exactly buttons. Instead, there is a control wheel at the top of pen for navigating your way through the tiny LCD screen. I’m guessing that when you need to dial, you spin that wheel to get to your number and then push it in to select it.

There’s also a microSD slot for whatever reason, but a SIM card slot is noticeably missing. In this way, you’ve got to wonder how the phone function works at all. They say that it’s not “just a concept” and that there is a working prototype kicking around some place. The downside is that no one has seen this mythical working unit.