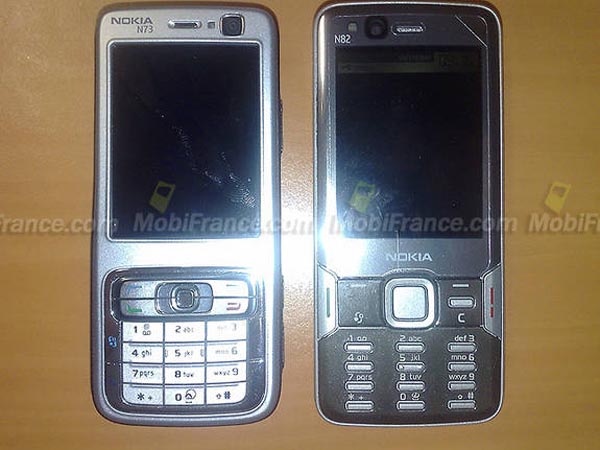 We snuck you a peek at the Nokia N82 prototype yesterday and while that spy shot gave you a glimpse as to what you should expect from this upcoming Nokia smartphone, it just wasn’t satisfying enough. If you want to get a better sense of the physical dimensions on the Nokia N82, you’re in luck, because here is the phone side-by-side with the Nokia N73.

What’s curious about the Nokia N82 is that it doesn’t follow the sliding tradition started by the Nokia N80 and continued with the Nokia N81. Instead, the Nokia N82 has a candybar form factor that falls more in line with the Nokia N70, N72, and the N73. Weird. In this photo, you’ll also notice that the chrome doesn’t look quite as shiny as the previous shot. This could be due to lighting effects or this may be a new housing altogether.

If you want to see this upcoming smartphone next to the Nokia N95, there is also a picture available at Slashphone that you might want to check out too. I’m personally not a fan of the skinny numerical keys, but I like the N-series. I’m torn on this phone; how about you?