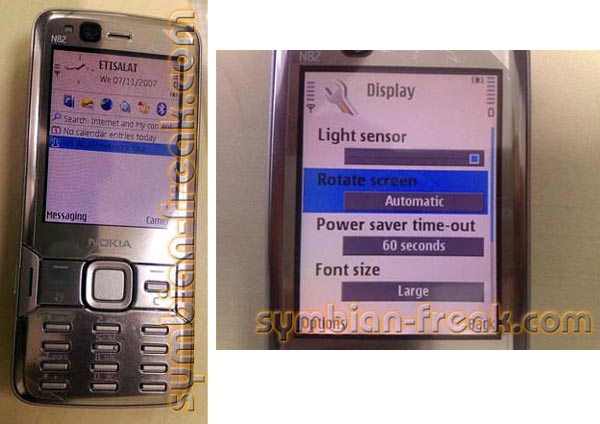 The N-series of smartphones from Nokia has been quite a hit for the company. My brother is a proud owner of a Nokia N73, for example, and he absolutely adores that handset. I once wanted a Nokia N80 and have begun to lust after the N81, but let’s push it one generation further. What you see here are photos of the Nokia N82, still in its prototype stage.

It’s been known for a little while now that the Nokia N82 existed and that it would sport a 5.0 megapixel camera with xenon flash and autofocus. Based on these pictures, we can confirm that the picture-taker also has Carl Zeiss optics with a Tessar 2.8/5.6 lens. Other features revealed by symbian-freak include GPS, Bluetooth, WiFi, quad-band GSM, and HSDPA. You want wireless radios? You got it.

There appears to be about 109MB of internal memory, but that’s easily expanded through the card slot. We also expect the Nokia N82 to sport automatic display rotation a la the iPhone. Stay tuned, ’cause this phone looks hot hot hot.