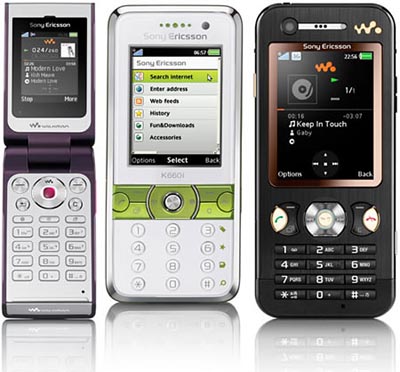 On Monday, we told you that Sony Ericsson was planning a trio of new cell phones. The handset-maker has followed through on those rumors, because here are the officially unveiled Sony Ericsson W380i and W890i Walkman phones, as well as the K660i Cyber-shot phone.

The specs are pretty much on line with what we were expecting. The range-topping Sony Ericsson W890i follows on the slim success of the W880, coming in at just 0.39-inches of thickness to accompany its 3.2 megapixel camera, HSDPA, and a free 2GB Memory Stick Micro card included as part of the bundle.

The other Walkman phone is the Sony Ericsson W380 is the cheapest of the three phones announced, coming in with a much more “square” design than the W300. Key specs include a 1.3 megapixel camera, M2 expansion, quad-band GSM/EDGE, and “semi-hidden external music controls.”

The K660i is the odd one out of the bunch. Instead of focusing on music, this candybar has web browsing as its highlight. Rotate the phone on its side for landscape surfing and the d-pad transforms into a virtual mouse. It’s also got Euro 3G support and a 2MP camera.