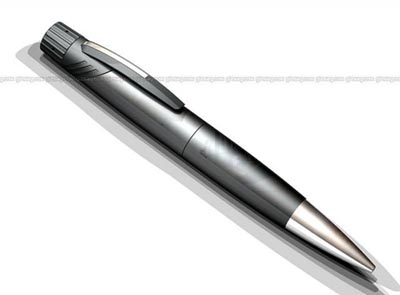 This has got to be the most advanced pen known to man, putting to rest any claims that a sword could ever be mightier than a writing instrument. You see, this unassuming-looking pen packs a lot more wallop that just scribbling down some notes: it’s capable of recording QVGA video at 30fps. But wait, there’s more.

You don’t even need to be there to record the video, because the pen can be set to start recording when it detects motion in front of it. Alternatively, it can also be used as an audio recording device, getting automatically activated when it detects a sound. Neat-o! All multimedia files are stored onto a microSD memory card and then you can transfer the videos via Bluetooth. Yes, it’s got Bluetooth too.

Whether you’re Johnny English or James Bond, all international spies need to have this pen. It’s still “under development”, but the plans are calling for a final release around March 2008. Pacific Defence is the firm behind the mighty pen, so contact them if you want more info.