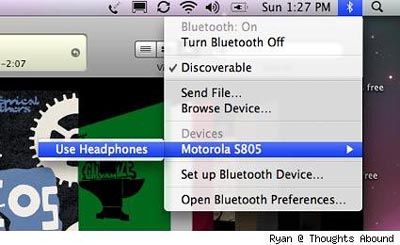 Although the Apple iPhone doesn’t seem to have any stereo Bluetooth support, the Cupertino-based company is happy to cut the wires on their new computer operating system, codenamed Leopard.

Mac OS X Tiger lacked any sort of A2DP Bluetooth audio profile support, so it’s nice that Steve Jobs and the rest of the produce-fueled team are providing us with stereo Bluetooth this time around. Maybe it all it took was choosing a cat with spots. The screenshot here is provided by Ryan at Thoughts Abound, confirming that OS X Leopard will pair with a Motorola S805 Bluetooth stereo headset.

This means that you can now stream iTunes music without wires straight into your eardrum. Ryan also the inclusion of the AVRCP profile, meaning that you can make use of the controls on your Bluetooth headphones or stereo as well. A2DP uses compression, though, so it’s not a high-fidelity solution. But hey, no wires makes it all worth it.