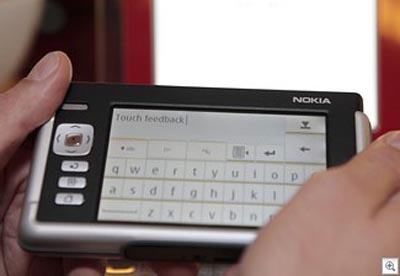 Touchscreen displays are probably the most versatile of input methods, but many people dislike the lack of tactile feedback. That’s why the new S60 touch interface from Nokia promises to give you a button-like response every time you touch the screen.

You see, the ‘touch feedback’ touchscreen by Nokia features “two small piezo sensor pads under the screen” and this provides a “0.1mm movement in the screen itself,” Nokia Senior Program Manager Roope Takala explains. This slight movement and rebound is supposed to “mimic exactly the sensation of pressing a real key.”

What’s more, the Haptikos system — as it has come to be known — comes with a slight clacking noise each time you press a virtual button, again mimicking the response you get from a real key. This system is so good that “it as hard to remember that you were using a touchscreen keyboard.” Sounds like Nokia has a slight leg up on the iPhone, in this respect. Look for Haptikos to make its official debut in the first Nokia S60 Touch phone.