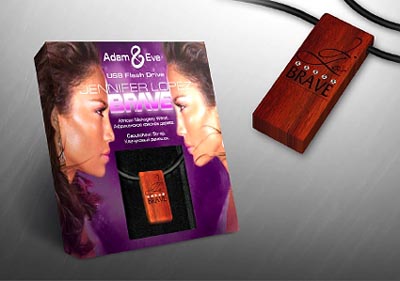 Don’t be fooled by the rocks that I got. I’m still, I’m still Jenny from the block. Even if I rock an overpriced special edition flash drive that really does nothing but add some African Mahogany to the mix. Jenny likes wood.

Created by luxury handset maker Gresso of Russia, the the tricked-out Jennifer Lopez Brave flash drive is wrapped up in some limited edition wood grain and it comes preloaded with the diva’s latest album, Brave. Gresso is already known for wrapping things up in wood, as they have demonstrated with at least two cell phones.

What’s silly is that we have no idea how much capacity this little drive contains, but I have a feeling that the storage space is pretty paltry. And it costs $70. Used to have a little, now I have a lot. No matter where I go, I know where I came from… sorry Jenny, I’ve been fooled by the rocks that you got and based on this luxury item, I don’t think you’re still Jenny from the block.