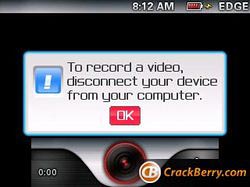 The BlackBerry line of handhelds from Research in Motion is clearly targeted at the business end of the market and many paranoid companies do not allow cameras within their protected walls. It’s just not the Enterprise way, because it wouldn’t be very good to have trade secrets leaked out to competitors. That, in part, explains the slow adoption of cameras on the BlackBerry.

Well, seeing how you have no problem buying a BlackBerry with a digital camera these days, it is quite curious that there’s still no video recording. But that’s about to change. What you see here is a sneak peek at BB OS 4.3, the new operating system for RIM’s handheld and it’s going to let you record video. About time, wouldn’t you say?

The new BlackBerry 8130 Pearl already has this new OS, but it’s also going to be made available to the 8100 and Curve as well. There are obviously other updates and upgrades in the new OS, but video recording has got to be the biggest highlight.