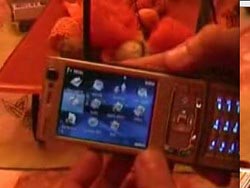 Although Nokia is the world’s biggest cell phone maker, it has been largely overshadowed these past few months because of a certain handset sprouting out of Cupertino. One of the coolest features on the iPhone is its ability to automatically switch between portrait and landscape mode. Now you can enjoy the same automation on the Nokia N95.

Not possible, you say? Well, there is already an accelerometer inside the Nokia N95 so the hardware side of things is already taken care of. That’s the technical doo-dah that gets the phone to recognize whether it’s being held upright or on its side. For the software side of things, look no further than the rotateME software being released later this month.

With the app installed, your sliding smartphone will swap from portrait to landscape and back with little more than a tilt of the head. Check out the video demo to see how it works.