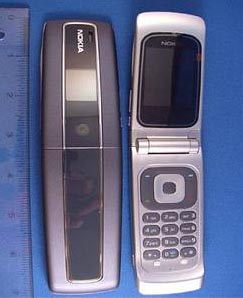 As 3G mobile phone technology becomes more of the norm here in North America, we will inevitably get hit with a variety of more affordable handsets that can latch onto the higher-speed signals. The 3G-capable Nokia 6555 is already available through AT&T, but it looks like its cheaper cousin is on the way as well.

The Nokia 3555 cell phone recently received the all-important stamp of approval from the FCC, pointing toward a possible 3G launch among the iPhone-occupied AT&T shelf. No official announcement has been made by Nokia or AT&T, but this prediction only makes sense. We also find that this new clamshell rocks a new S40 interface with IM and email support.

In addition to quad-band GSM connectivity, the Nokia 3555 also does dual-band WCDMA and stereo Bluetooth. Memory expansion is done through a microSD slot. The camera, unfortunately, is a VGA number and that’s the price you pay for going budget. Stay tuned for more el cheapo 3G action.