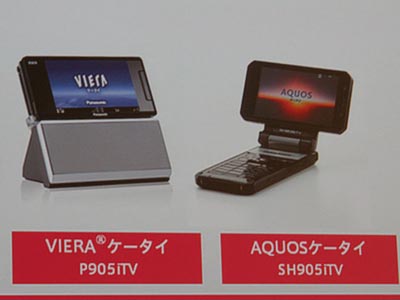 North America is still pretty far behind when it comes to mobile technology, even though we’re starting to get bombarded with all sorts of 3G technology and touchscreen displays. Over in Japan, NTT DoCoMo is putting us all to shame yet once again with a couple of new cell phones, both of which come with the same kind of TV technology as that big screen in your home theatre.

The P905iTV from Panasonic leverages the company’s VIERA technology on its 3.5-inch display. The SH905iTV from Sharp is equally impressive with a 3.5-inch display of its own, rocking the firm’s hugely popular AQUOS technology. This is some crazy mobile television here folks, complete with an awesome 480×854 pixel resolution (not quite HDTV) and a frame-rate of 30fps.

Both phones come with on-board TV tuners, naturally, as well as EPG and the ability to record TV programming. The Sharp SH905iTV also brings Dolby Mobile to the mix as well.