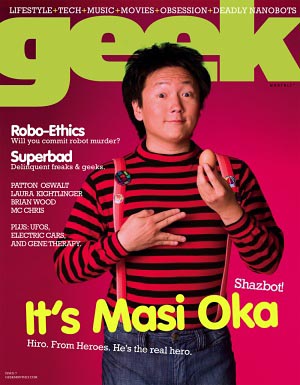 The people behind the One Laptop Per Child (OLPC) project aren’t quite getting the level of publicity that they want, so they have elicited the services of Masi Oka — you might know him as Hiro Nakamura from Heroes — to act as the OLPC Global Ambassador. We’re assuming that this is a paid role, much like his TV character, and he’ll have some words shoved into his mouth (much like his TV character).

Being a part of a global effort that is enabling children to learn, grow and succeed in life is both tremendously gratifying and important to me,” said Masi Oka. “I’m very excited about this opportunity to represent One Laptop per Child and bring my love of technology and education to the global community. I believe that it is incredibly important to enable access to learning for all children so that every child has the opportunity to create a better life for themselves, their family and their society.

C’mon, we all love Hiro Nakamura, so it’s actually a pretty smart move from the OLPC team to get Masi Oka to be their poster boy. He’s geeky, yet appealing and that’s exactly how they want the OLPC represented in the press. Of course, Masi isn’t exactly from a third-world country.

Whatever the case, I can just imagine the PR department at OLPC letting out a hearty “Yatta!” on the news.