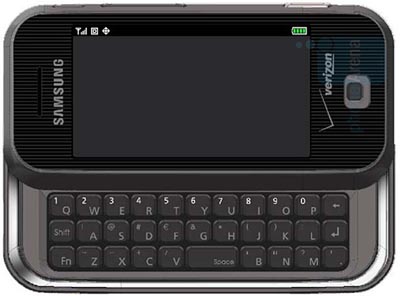 I have a soft spot for smartphone like this. I love the idea of having a full front-face touchscreen display, but what I like more is the horizontal slide-out QWERTY keyboard for ease of text entry. It’s become a standard form factor for HTC, but a certain Korean company wants a piece of the pie too.

You may have seen the Samsung F700 smartphone before with its HTC-attacking tendencies, but it turns out that the version heading to Verizon Wireless is not the F700; it’s the Samsung U940. The physical shape is nearly identical, but they’ve downgraded the camera from a 3MP to a 2MP shooter. The front touchscreen has a glorious 440×240 pixel resolution though.

Another key difference will likely come from the user interface. Seeing how Verizon loves to emphasize their V CAST capabilities, the menu will probably boast quick access to mobile music, TV, and more.