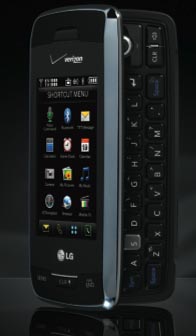 For starters, both the internal and external displays boast a formidable 400 x 240 resolution. Contrast this to the tiny external display on the LG enV and you’ll really start to appreciate the difference. What’s more, the outer display is actually a touchscreen, bringing in undeniable comparisons to the iPhone. It’s also notable that the on-board camera is capable of recording video at QVGA resolution.

Rounding out today’s specs on the Verizon Voyager are 240 minutes of talk time, 480 hours of standby, and a one-touch speakerphone button on the internal keypad.