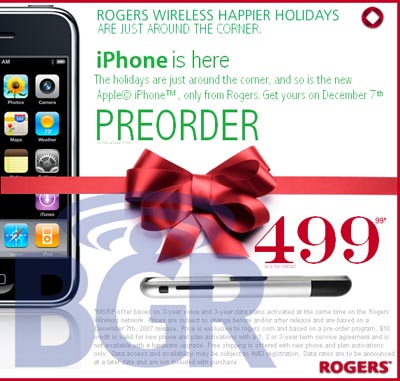 They’ve really got to stop tugging on our heartstrings. It was less than 24 hours ago that we discovered a Rogers Wireless iPhone ad proclaiming that the touchtastic cell phone would be available for purchase in Canada on December the 7th. The print ad looked pretty legitimate, but it turns out that it was one big fraud.

Rogers spokesperson Odette Coleman said that this leaked iPhone ad “was not produced by Rogers. Nothing further to announce on iPhone.” This does not necessarily negate the possibility of the iPhone coming to Canada; it just says that this ad was fake. Or does it?

It is perfectly possible that this ad weas indeed “not produced by Rogers”, but was rather produced by an advertising agency on behalf of Rogers. In this way, Coleman’s statement could still hold up and the iPhone could still make it our maple leaf-fueled shelves in time for the holidays.