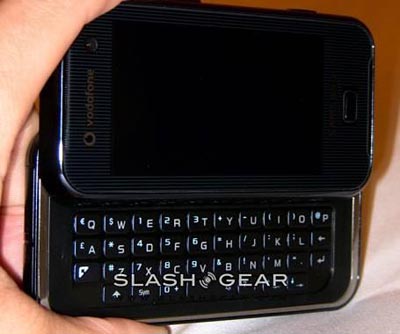 This is one formidable smartphone. For the most part, HTC is the name that most people trust when it comes to a PDA phone with a sliding QWERTY keyboard, but the Samsung F700 “Croix” could be on its way to the United States to battle for that throne. No exact date has been mentioned, but the “Croix” could be finding its way to Verizon Wireless “soon.”

Naturally, because the current model (the Vodafone version is shown) is a GSM handset, a few radio swap is in order. They’ll ditch the GSM and HSDPA in favor of CDMA and EV-DO to run on the Verizon Wireless network. The rest of the key specs remain untouched, like the touchscreen display, 3 megapixel camera, and textured surface.

Chalk another one up for the rumor mill, but if true, the Samsung F700 “Croix” could really give HTC a run for its money. Heck, it might even challenge the — dare I say it — iPhone from AT&T.