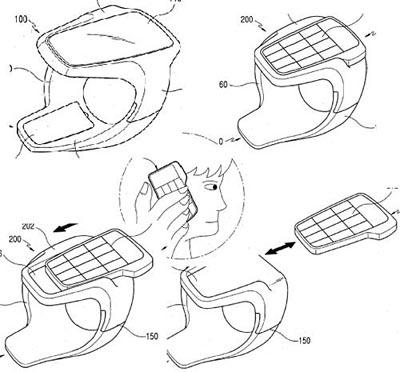 The concept of a Bluetooth watch is nothing new, but Samsung is flipping the concept on its head with their latest patent filing. Whereas it was the wrist-worn component that has “traditionally” been the Bluetooth side of things, this patent has a wrist-worn element that serves as the actual phone, whereas it is the credit card-sized removable component that connects via Bluetooth.

You see, the detachable part contains all the key elements that you would like to see on a cell phone. You get the basics like a screen, keypad, speaker, microphone, camera, small battery and a Bluetooth chip. The wristband part is really the actual phone, however, housing the 2.5/3G communications chipset, main battery, processors, and so on.

It’s quite a different design, but isn’t it pretty much useless in its current incarnation? The objective of a Bluetooth headset is to keep your hands free, and if you have to hold the removable unit up to your ear, you might as well hold an actual phone up to your ear, no?