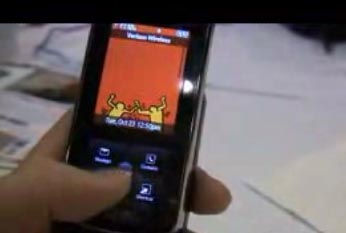 The concept of putting two screens on a single cell phone isn’t exactly revolutionary. What makes the Venus by LG so special, however, is that it puts the two displays on one top of the other. Featuring a lovely slider design, the LG Venus has a conventional screen near the top, but beneath it is a touchscreen for most of your navigational controls.

While other slider phones, particularly those by Samsung, have integrated touch-sensitive controls beneath their displays, this is the first time that I’ve seen a partial touchscreen as a primary means of navigation. You can see how versatile such an orientation can be, because context-sensitive “buttons” can be shown.

Based on the video shown below, this looks like quite the beautiful device, but if you’re going to do a partial touchscreen like this, why not make the entire face a touchscreen? Oh right, the HTC Touch Dual already did that.