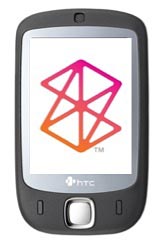 Chalk another one for a largely unsubstantiated rumor, but this one is so juicy that we just couldn’t pass it up. We’ve anxiously been awaiting the arrival of a ZunePhone from Microsoft, but it’s very well possible that the handset already exists. You might even own it without knowing it.

This is because Microsoft may be working on a “revamp of the MSN Music service with a tie-in to the Zune Marketplace.” This revamp would also include access via Windows Mobile, and as such, you’d be able to make Marketplace purchases and/or share Zune Pass songs with a non-Zune device. You know, like a Windows Mobile smartphone.

This update could be accompanied by the launch of Windows Mobile 6.1, meaning that the emergence of a bona fide Zune Phone could be little more than a software update on an existing WinMo handset. Seeing how so many Windows Mobile phones have WiFi anyways, this becomes a very plausible possibility. Microsoft has already shown that Zune 2 features can be enjoyed on a first-gen Zune, so why not expand that even further to Windows Mobile phones too?