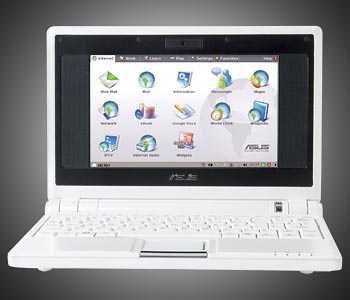 Considering that you can get the Asus eee PC 701 for a mere $399, many people are wondering whether it’s even worth buying. According this review, it is absolutely worth its weight in gold. Laptop Mag took the budget laptop out for a spin and found that it was “small, but not too small” with its seven-inch (800×480) display and slick MacBook-like appearance.

The review also notes that this mini notebook is “chock-full of useful apps”, granting you instant access to things like instant messengers, the Firefox web browser, word processors, spreadsheets, and the media player. Sure, the Asus eee PC isn’t the most powerful thing in the world with just a 900MHz Celeron processor, 512MB RAM, and 4GB SSD, but it’s remarkably speedy thanks to the fantastic Asus Xandros-based Linux OS.

And that’s what really sold the reviewer on this tiny laptop. The user interface is utterly fantastic and the Asus eee PC is perfectly capable of doing most things that a full-blown Windows PC can do. Weighing just 2 pounds, it’s got 802.11b/g WiFi, three USB 2.0 ports, and SD/MMC expansion too.

In the end, Mark Spoonauer was more than happy to give four stars out of five to the Asus Eee PC 701.