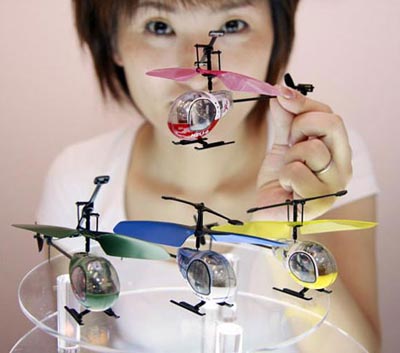 Radio controlled gadgets are cool, especially ones that can take to the skies and annoy the living daylights out of your kid sister. The Heli-Q RC helicopter from Tomy is one such toy.

Tomy is saying that the Heli-Q is the world’s smallest radio controlled helicopter, but don’t let its colorful and small stature fool you. The Heli-Q is quite the cool flying device and the specs appear to be on par with the Picco-Z Styrofoam helicopters. Because of its small size, the Heli-Q doesn’t pack much of a battery life, unfortunately. It can only flutter about for five minutes on a single charge.

There’s been no indication of price from Tomy at this point, but the toymaker is promising that the Heli-Q RC helicopter will hit (Japanese) store shelves sometime next month.